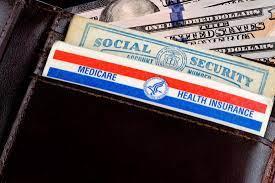 Are Social Security and Medicare Going to Last?

Social Security and Medicare are very important programs.  Those currently receiving Social Security benefits appreciate the monthly income that grows with inflation and continues as long as they live.  The Medicare program provides health coverage during potentially vulnerable times.  But some people who haven’t started receiving benefits wonder if the programs will be around when they retire.  The answer is yes, but their benefits may be reduced and/or additional taxes required.  This post will provide a brief financial overview of these programs in a Q&A format.

Before I begin, there are two important documents I encourage you to become familiar with:

What programs are included in Social Security and Medicare and what is funding status?

Social Security and Medicare are social insurance programs that provide benefits for individuals or family members for those workers who satisfy the number of years worked (and paid taxes) requirement.  There are two programs under Social Security (SS) and two under Medicare, each with their own financial status.

I will start with the funding summary, then continue with additional details and graphs for those interested.  It is common to express the financial health as simply two programs – Social Security (OASDI) and Medicare (Part A, B, D) but each has two further components with different funding.

Who pays for Social Security and Medicare?

You do – either from payroll tax or general tax revenue.  Current workers contribute a portion of their paycheck for the first three programs above - sometimes called “payroll tax” or “FICA tax”.  Your employer also pays the same tax; the self-employed pay the full 15.3%.  The OASDI tax applies to income up to $147,000 (for 2022) but the 1.45% Medicare tax is paid on all income.  There is an additional 0.9% Medicare tax for income above $200,000 for individuals and $250,000 for joint filers that started in 2013 to help fund part of Affordable Care Act (not shown in table below).  This is only paid by the employee.  Also note the $200k and $250k is NOT indexed for inflation, catching more workers each year with wage inflation.

Medicare Part B and Part D is funded from two sources – about 75% comes from general revenue of our generous taxpayers and 25% comes from monthly premiums by retirees.  That’s right – the monthly Medicare premiums only cover 25% of the true cost.  Medicare Part B monthly premium = $170.10/month; Part D varies by plan.  Additional tiered premiums for Part B and D are required for high income retirees (above $91,000 for individual filers; $182,000 for joint filers).

Does each worker have their own account where the payroll taxes go until they retire?

No.  Unlike your 401k account or savings account, Social Security and Medicare Part A use something called “pay-as-you-go funding”.  This means payroll taxes being collected by current workers are used to pay the bills for existing retirees.  When the existing workers are retired, the next generation of workers will be paying their bills.  Yes, the number of workers relative to the number of retirees changes over time and impacts the financing. The Social Security and Medicare actuaries project the expected financial impact on these changing demographics, but the tough part is convincing politicians and the public to make the tough choices now to assure long-term funding. 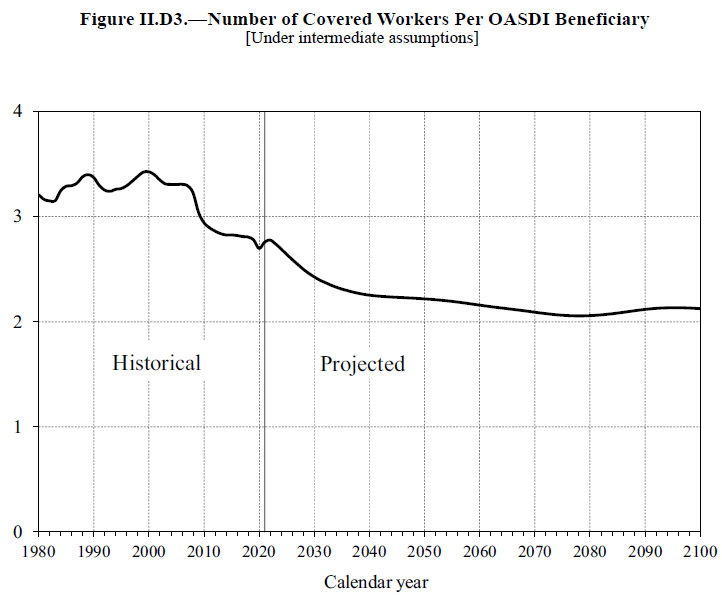 What happens to the extra payroll tax not needed to pay current benefits?

So how soon will the Trust Funds hit $0?  Then what happens?

Soon!  The Old-Age and Survivor Trust Fund is projected to hit $0 in 2034 at which time only current payroll tax will be available to pay benefits (about 77% of promised benefits).  The combined OASDI Trust Funds would hit $0 in 2035 and then cover about 80% of benefits.  Medicare Hospital Insurance Trust Fund (Part A) is projected to run out in 2028 when current payroll tax is projected to cover about 90% of promised benefits.  Where is the Trust Fund for Medicare Supplementary Medical Insurance (Part B and D) you ask?  It is never projected to be depleted since financing the SMI is set to meet expected costs, again 25% from increasing Medicare premiums and 75% from taxpayer generosity.  These projections are slightly better than last year’s projections due to the faster economic recovery than estimated and lower Medicare costs as some procedures delayed due to COVID. 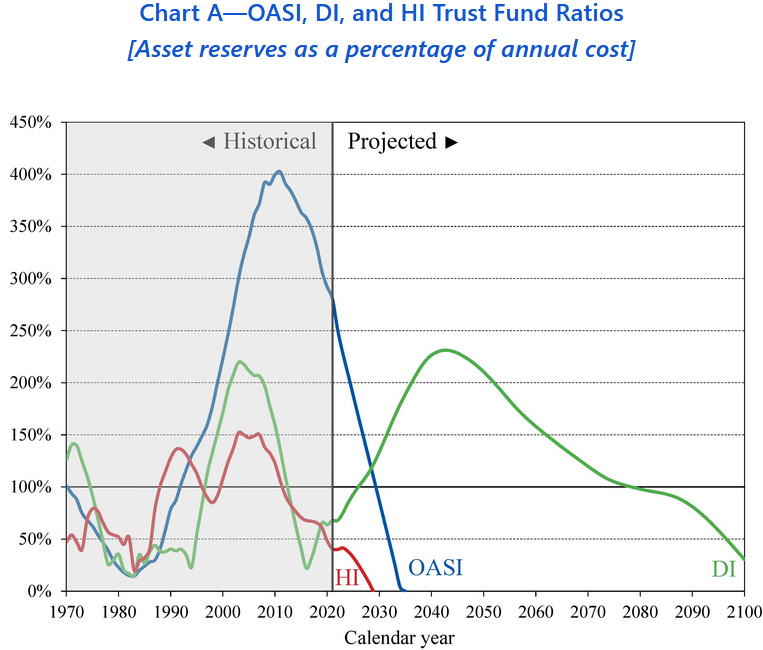 Wait a minute.  Tell me about Medicare funding again?

Only the Hospital Insurance (Part A) is funded by payroll taxes (see red area in graph below). The Supplementary Medical Insurance (Part B and D) has about 25% funding from Medicare premiums (green area) and most of the other 75% from general taxing revenue (grey area) and taxes on Social Security benefits (blue area).  That is why Medicare Part B premiums seem so reasonable.  What is staggering is the projected cost as a % of GDP for the overall program – going from 2% in mid-90’s to 4% today to over 6% by 2040!  The majority of that expanded cost has to be covered by general tax revenue based on current law – not payroll taxes or dedicated premiums.  Some in Congress continue to push for expanded Medicare coverage but others question the prudence of that when even the current promises can’t be covered.

So should I assume I will get nothing from Social Security?

No.  You will very likely get less than currently promised but it won’t be $0.  Remember Social Security is a pay-as-you-go system.  After the Trust Funds are depleted you will still have current payroll tax coming in to pay benefits.  The graphic below shows that while there won’t be enough funds to pay the current promises, it will be enough to pay 80% starting in 2035 (using combined OASDI), then drifting down to 74% in 2096 and beyond.  In reality, it will likely be some combination of lower benefits and higher taxes to avoid this cliff, though the Wile E. Coyote moment is coming soon – Beep!  Beep! 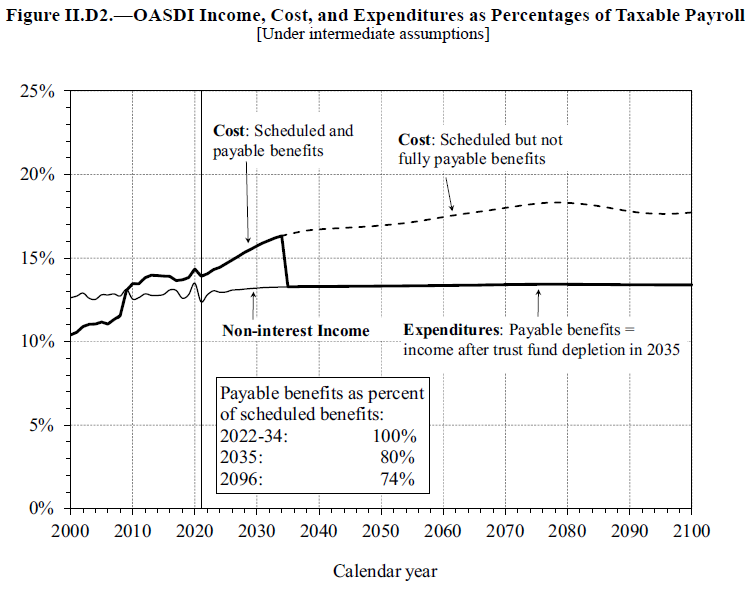 I’m in good health and my advisor keeps telling me to delay Social Security.  My parents claimed SS at 65 so why shouldn’t I?

Because you are living longer and your benefit will be reduced by 13% for life if born in 1960 or later.  Think of Social Security as an inflation-adjusted income payable for as long as you or your spouse are alive from a high-quality institution.  For those born after 1960, delaying your benefit by just three years will increase this wonderful pension by 24%.  Did I mention it also grows with inflation and is payable for life?  Get some of that.

Can’t they just raise taxes to cover the shortfall?

Sure – but the combined rate is already quite high, and much higher than expected when the program began.  The projection to cover the Social Security shortfall is to increase OASDI payroll tax from 12.4% (6.2% x 2) to 15.8% (extra 3.4% of your income).  After adding on the 2.9% Medicare tax you are at 18.7% - almost one-fifth of payroll – to fund the ever-increasing benefits.  The table below shows the historic OASDI and HI payroll tax rates since the mid-60’s.  It is important to recall the original intent of Social Security was to keep individuals out of poverty, not to provide full retirement income for most Americans.  It is difficult to make changes when the impact is so far down the road, but the day of reckoning is upon us.  Expanding benefits and related taxes is not the answer.  Rather, a healthy debate about what % of your total income should be forced into a government program that provides a necessary safety net to keep people out of poverty and leave the remaining amount in the hands of the individual. 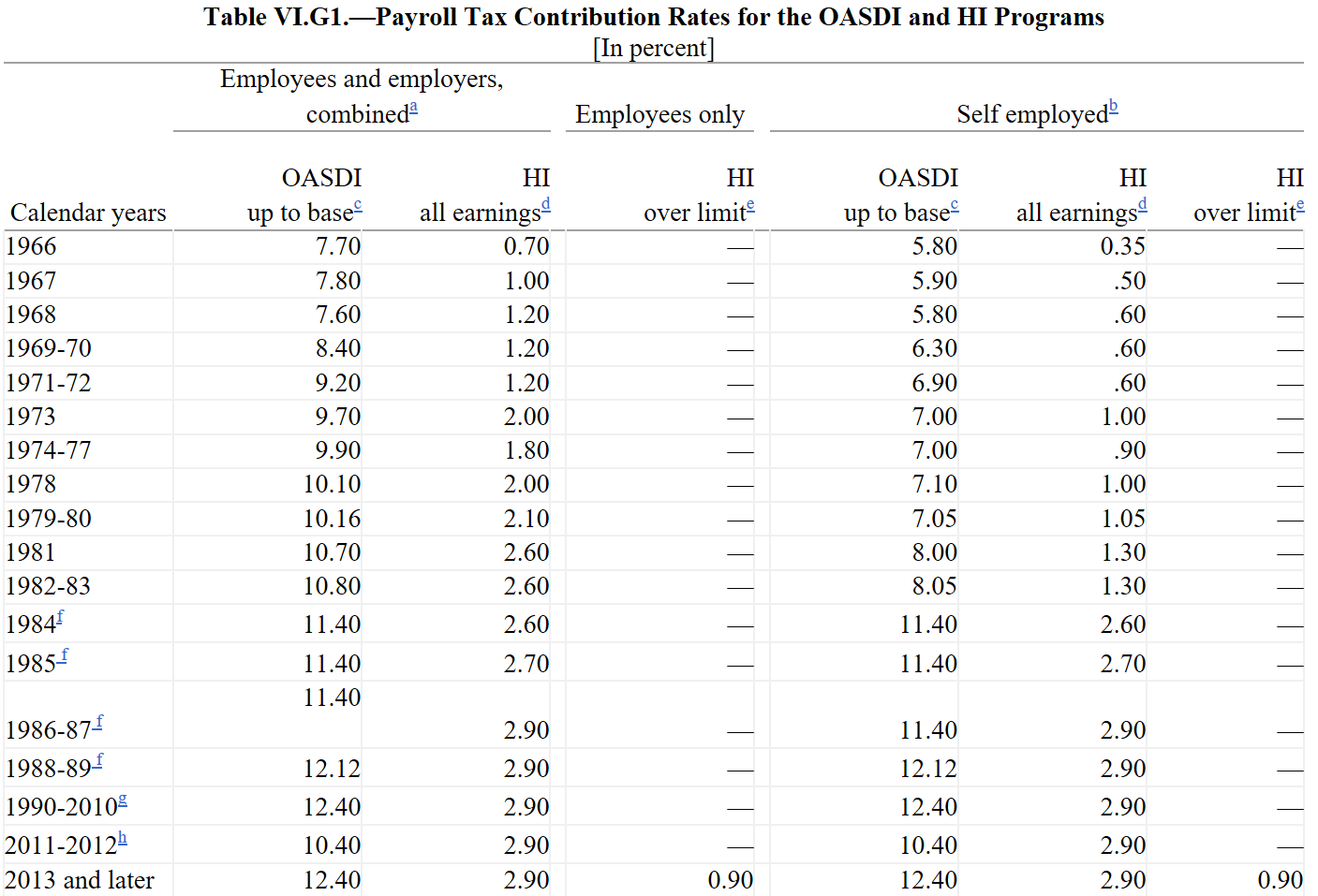 Can’t they just raise taxes on the high income earners? 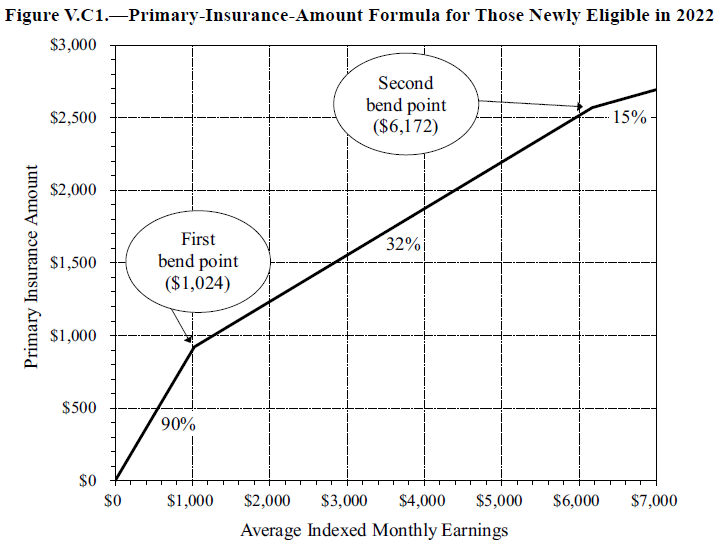 What changes to Social Security are being considered and what is the impact on funding?

There are different changes being considered to the Social Security program.  A summary of the changes and the financial impact to the program is summarized by the Office of the Chief Actuary and can be found here.

Potential changes range from the type of cost-of-living adjustments to “bend point” changes to extending the retirement age to reflect longer life expectancy.  It will likely require some combination of these changes in order to assure long-term financial stability.  Note these are only Social Security changes, not Medicare.

If you are still with me I hope this was helpful.  It is important to be aware of the issue to not only help plan your retirement (don’t assume $0 Social Security benefit!) but also to engage in a thoughtful, well-informed debate about the best path forward for these important yet financially troubled programs.