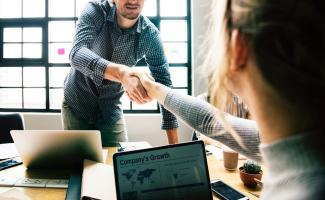 The jobs report was released yesterday and the market loved it, not only for the lower than expected wage inflation but also the large number of new jobs - 313,000 PLUS an additional 54,000 from previous months' upward revisions.  That is very solid job growth, though we have seen this growth before as demonstrated by this graph - separating the total jobs between government and private industry.

The secondary statistic getting attention was the fact that the unemployment rate remained flat at the very low 4.1% on the back of this strong jobs growth.  There are two main reasons when the normal relationship between number of jobs and unemployment rate is inconsistent.

This past month both factors showed a favorable trend, with the second factor explaining the flat unemployment rate.

Another ratio not commonly cited that had a favorable reading despite the flat unemployment rate was the employment ratio.  That jumped up a strong 0.3% this month.  For those craving the actual numbers I include the relevant table from Friday's report at the bottom of this blog post.  Let's first let a picture tell us a thousand words using the past two-years to see the blip up and the last 70 years for context.  Happy job hunting!