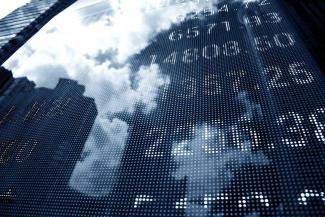 It was another solid month of returns, not only for equity markets but bond markets as well (except for long-dated treasuries).  While the YTD returns for the major indices are still negative, the US large caps are getting close to even for the year while small caps are lagging.  The tech-heavy NASDAQ index is positive for the year, up over 12% on a total return basis.  Also notice the corporate bond index with a 5% YTD return.  There is a big buyer in that market - see later. 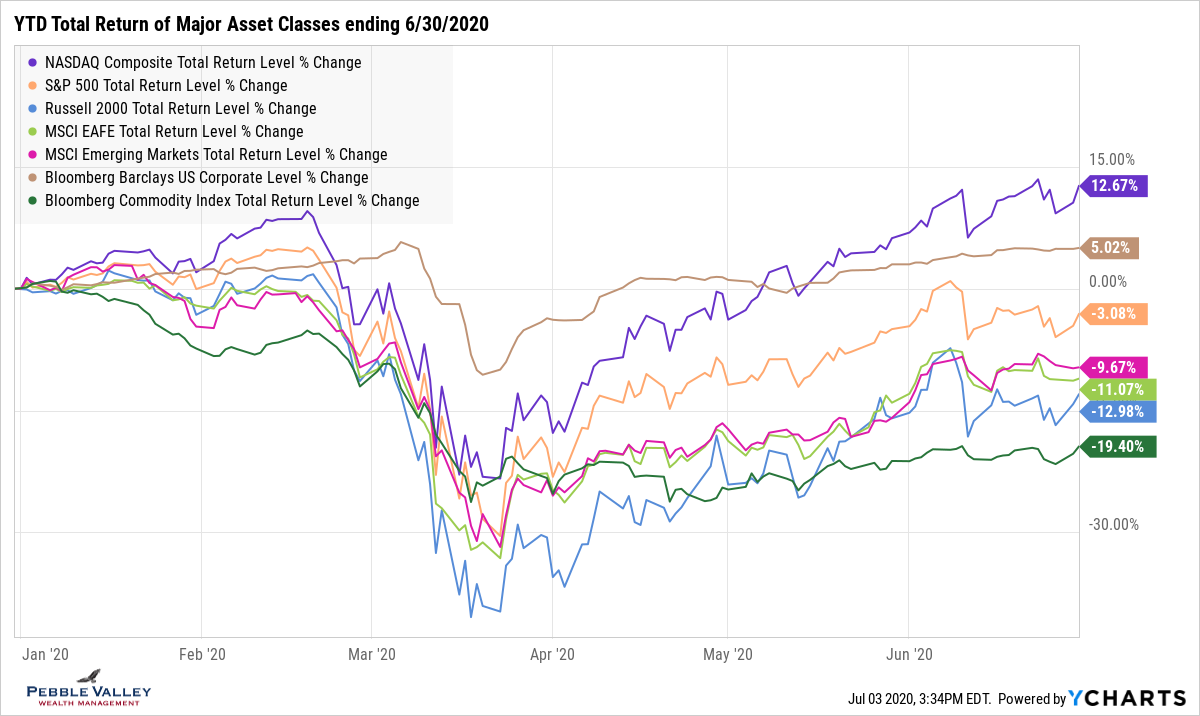 The month of June got off to a strong start on the back of a surprising jobs report that showed a faster than expected resumption of business activity.  That enthusiasm was dampened during the month by concerns of whether that pace can continue and rising trade tensions with China.  The June jobs report released July 2 showed the re-hiring pace continued, with much of the job increases coming from “leisure and hospitality” (see pg 3 of this link).  Some of these establishments may have to pull back again in some regions but expected to be a slowing of the acceleration, not a deceleration.  Note a few things on the monthly change in jobs and unemployment rate over the past 20 years.

Another key driver to explain some of the resiliency of the markets is the Fed support.  Recall they launched many different programs with the intent to provide a bridge for businesses to remain viable until activity resumes.  The Fed is also buying corporate bonds - a lot of them - making it in the top 5 holders in three major bond ETFs.  This was in addition to the fiscal programs the government launched to provide income to individuals during the same time – one-time $1,200 checks and expanded unemployment benefits.  Some of these fiscal programs are scheduled to end at the end of July.  While the Fed has plenty of monetary capacity left (see graphic below - Source:  Kathy Jones tweet), it will be important to watch the developments of another fiscal stimulus package this month.

Interest rates remain very low.  The Fed reiterated their intent to keeping rates near zero through 2020 based on the “dot plot" (see pg 3 in this link) from the FOMC meeting June 10th.  That’s a long time.  One rate that has been drifting up this month is the break-even inflation rate implied from the TIPS market.  This is also seen in the slight drift up of long-term rates that are most vulnerable to inflation … down the road.  Note the only two negative values in the last month column below is 30-Yr treasury return and inflation. 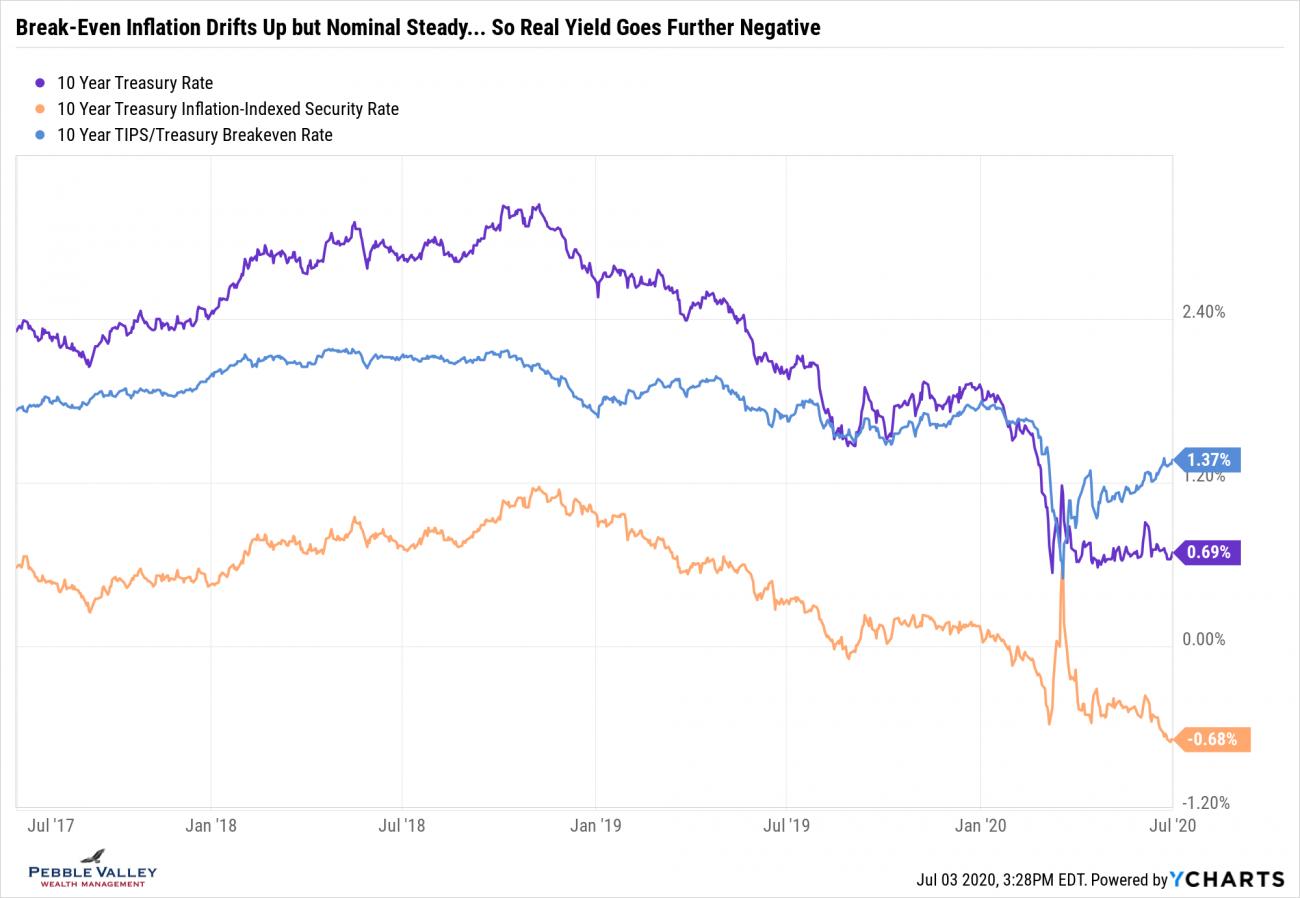 Finally, volatility remains high.  It started the month just below 30 but was well above that during the month before coming back down.  This continues to be an interesting dynamic in light of the headline equity run.

Continue to enjoy the sun and ice cream. 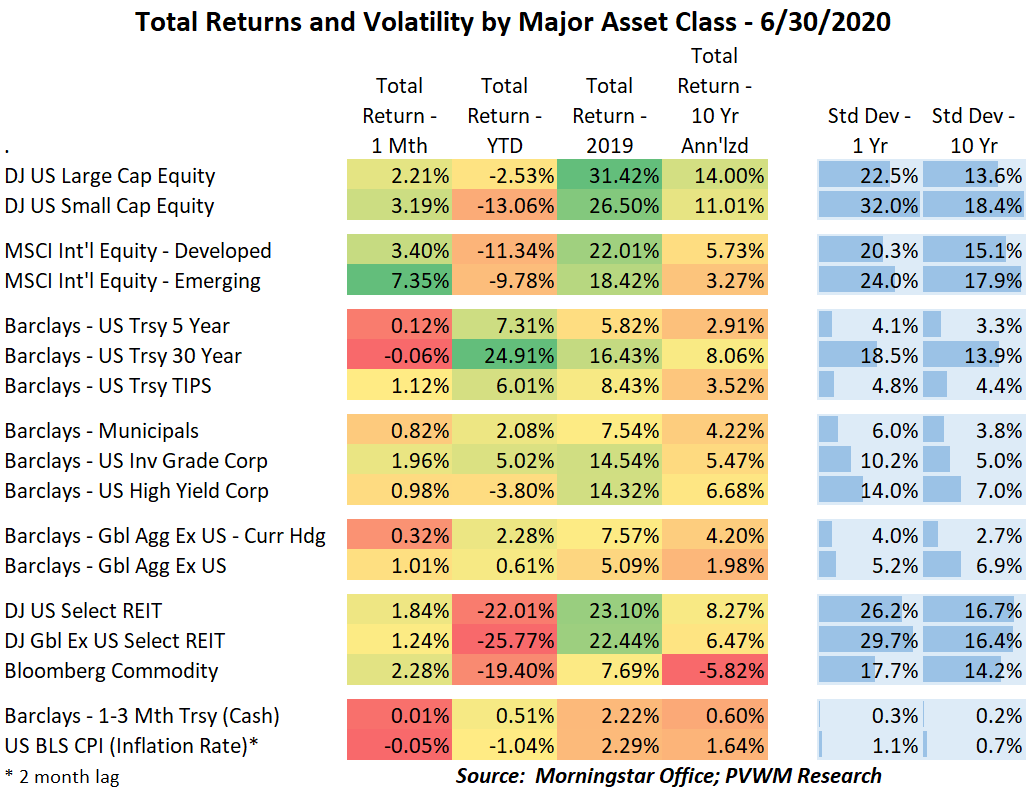