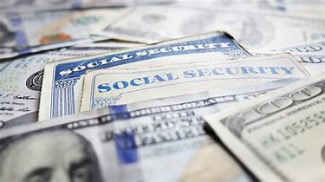 Each fall after the release of September CPI data the inflation adjustment for Social Security benefits is finalized.  The final CPI-W data point will be released October 13th but with 2 of the 3 data points known, an early estimate can be calculated.  It is likely the increase for benefits will be between 5.8 – 6.0% depending on the index change for September.  The Medicare premiums for 2022 will be released next month but expect an increase.  The net benefit hitting your bank accounts is then the increased gross benefit less any Medicare premiums deducted and income tax withholdings.

There is also an inflation adjustment that impacts current workers (based on a different index).  The FICA tax includes both Social Security (6.2%) and Medicare (1.45% +).  While the Medicare tax is applied to all income, there is a cap on Social Security which is adjusted based on wage inflation.  This results in more FICA tax dollars taken from your paycheck.  See the end of this post for more details.

The graphic below shows the steps to calculate the inflation adjustment and a graph of actual increases over the past 20 years. The 5.8% approximation assumes the September CPI-W data point will not increase.  If the monthly change in September CPI-W ranges from 0.4 - 0.6%, the annual SS increase will be 6.0%. 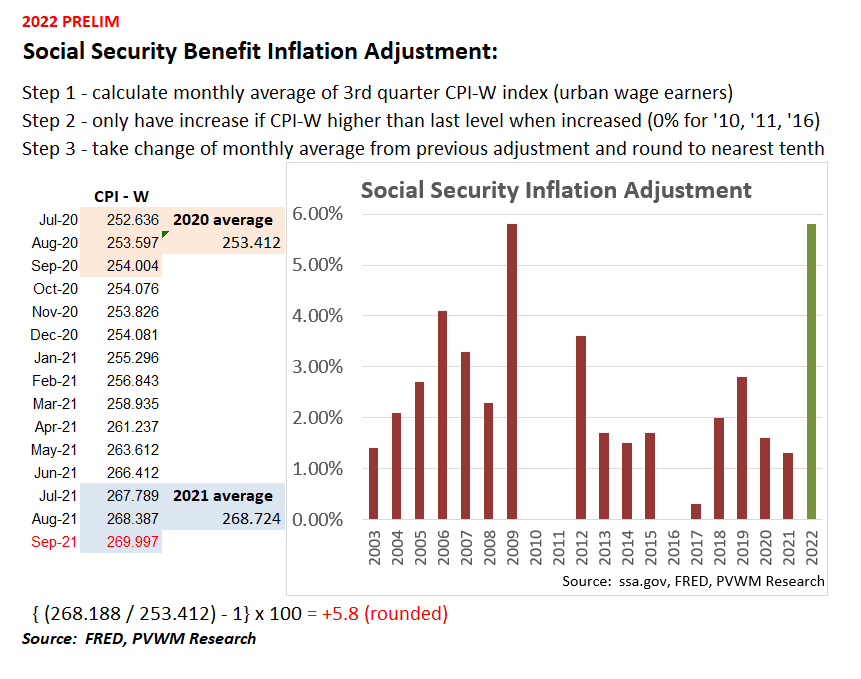 Note the inflation index used for Social Security is the non-seasonally adjusted index for wage earners (CPI-W), not the more common seasonally adjusted index for all urban consumers (CPI-U) reported in the media.  There is also a research price index called R-CPI-E which captures the common basket of goods and services for those age 62+.  There are years when the 62+ index can diverge significantly from CPI-W, mostly in years when there is a large move up or down.  Last September the R-CPI-E was nearly identical (0.04% higher); this July it is lower by 1.22% higher.  In the camp of “be careful what you wish for”, the SS beneficiaries will be happy to use the CPI-W this year.  The 10-year average difference is less than 0.20%.  The graph below shows these indices over the past ten years (Note: shaded area is for recession).  The common CPI inflation number in the news every month is the red line.

For those working and paying into Social Security (6.2% payroll tax for SS on wages up to $142,800 for 2021), the estimated increase in wages subject to this tax is based on a different index – the ‘national average wage index’ – calculated by Social Security.  They have not published an estimate on this index.  Recall there is an additional 1.45% payroll tax for Medicare that is applied to all wages (not capped), plus an additional 0.9% on earnings above $200,000 for individuals and $250,000 if married filing jointly (NOT indexed to inflation).  Your employer also pays these taxes (or you if self-employed), except the extra 0.90%.

Look for an upcoming blog post on a summary of Social Security financial status.  Yes it will still be there for the concerned young workers, but expect a roughly 20% haircut if no Congressional action is taken – based on the latest Trustee report.

Watch for the final inflation adjustments after the October 13th CPI-W reading.