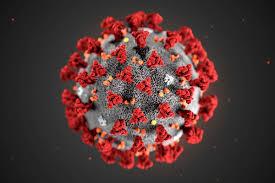 It's Working: Context for COVID-19 Data

Before I jump into background, numbers and projections, I want to acknowledge the pain, suffering and for some, death, of those infected.  To all the medical professionals treating them, helping them recover and being with those in the end – thank you.

I have been following the COVID-19 pandemic developments and Task Force press briefings closely.  Timely, informative data is also available from Johns Hopkins site for latest cases and IHME for the latest projections which is important (sources listed at end).  Not yet widely available are hospitalizations with recovery or the true number of people infected with no symptoms.  This post will summarize the projected deaths data, normalize it on a per 100,000 population basis, and show the differences between select countries and states.  For context, I also show the US numbers relative to the flu.  To be clear, COVID-19 appears to be much more contagious, vicious if contracted for some, and no vaccines versus the flu, but I believe it is important to keep the magnitude of deaths in proper context and how society has reacted in the recent past to large flu outbreaks.

Early on, the focus of COVID-19 was the number of cases reported, resulting deaths and to which countries it was spreading.  As the pandemic went global, focus shifted to the potential number of those infected, the strain on medical resources (beds, ICU beds, ventilators, equipment, people) and resulting projected deaths.  Given the early projections, lack of therapeutics and the speed of the disease from contraction to death, focus was put on slowing the spread between people to reduce the number of people hitting the hospitals at once - “flatten the curve”.  The only way to do that near-term was social distancing.  In the intermediate-term (weeks or months), therapeutics and better testing – including antibody tests - will allow the beginning of return to normal.  Long-term, a vaccine will be created (year or longer).

I am impressed by many things that give me confidence in addressing the pandemic:

Now that we are in this crucial month for the US, I want to summarize the different data points available and how I interpret (sources listed at the end of post).  I believe this is important as the discussion begins to consider the framework to begin re-opening our country - very likely not the same everywhere, but an opening.  With expanded testing in place (including antibody) and on the downward slope of the curve, the strategy can shift from social distancing to testing, tracking those infected (contact-tracing) and isolation of those as necessary.  For the data I summarize below it is important to note the following:

For a visual of the “peak” and “getting to the downward slope of the hill” here are the projected daily deaths for Italy (past peak), New York state (at peak) and US in total (approaching peak).  The projected total deaths are a sum of these daily totals in the graph - an integral for you math minds.  Following that are a few observations. 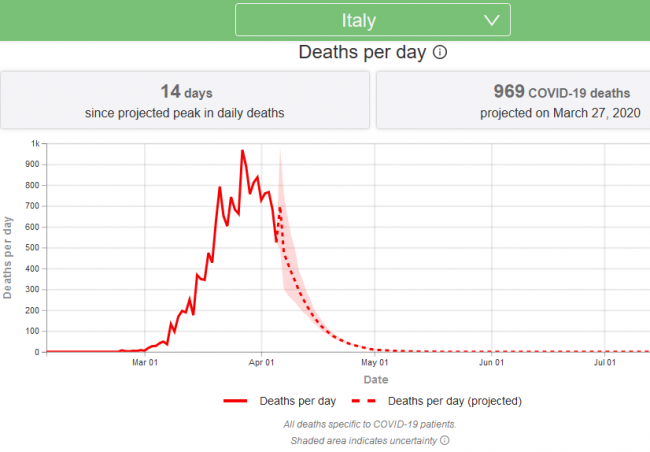 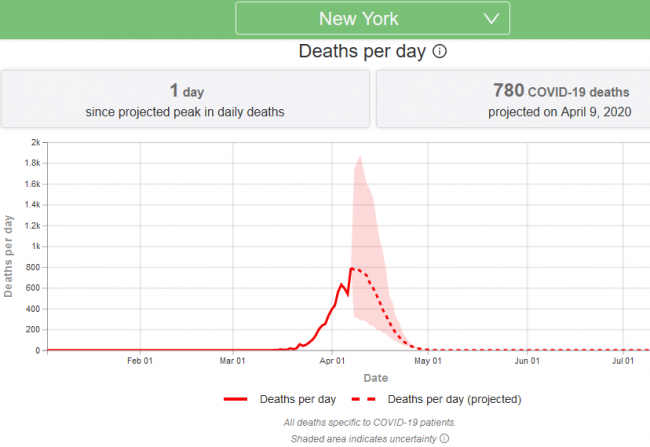 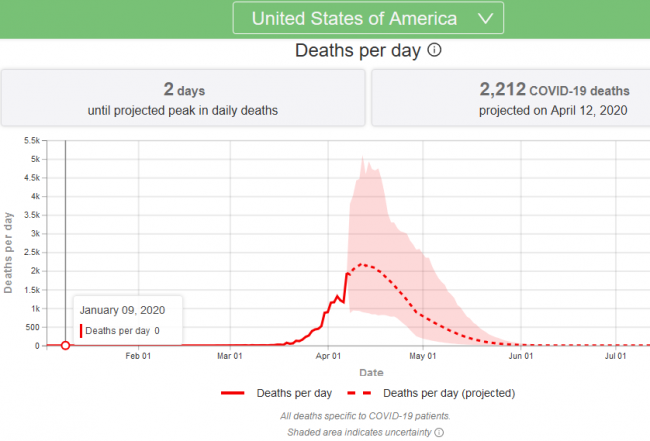 Observation #2 – Compared to other countries, US deaths per 100,000 is projected to be lower

Observation #3 – Within the US, some states are hit much harder than others

If want to see numbers instead of pictures, here is the table of data which feeds the graphs above plus more.  I highlighted in red the “Expected Peak Death Date” that is past or upon us.  I also highlighted the expected date when 90% of the projected deaths will have occurred.  There will be deaths beyond these dates for sure, but this is very important to realize how quickly “down the curve” we may get and the ability to shift to the next phase of strategy on resuming some activity.  Also note for the FLU I show number of medical visits as closest comparison to confirmed cases since currently only those with COVID-19 symptoms are tested.  It is also true the number of COVID-19 cases will continue to grow as testing expands.  Again, this is why my comparison metric was on projected deaths per 100,000 population for now.  Further metrics and summaries are needed after robust data becomes available.

Be safe.  And Happy Easter.