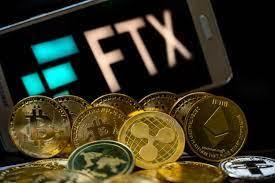 FTX Bankruptcy – What you should know.

Last week FTX – a cryptocurrency exchange and custodian – filed for bankruptcy.  This blog post will summarize what happened and how it may impact you, whether or not you invest in crypto assets.  There are additional articles and podcasts that go into much more detail, some of which are linked within the relevant sections below.  In summary, FTX customer funds that should have remained segregated but were not (fraud), credit was extended from FTX to a related hedge fund, and the swiftness of the downfall was fueled by leverage and illiquidity.

FTX is a cryptocurrency platform formed in spring of 2019 by Sam Bankman-Fried (SBF).  It was initially an international-only exchange and grew very rapidly.  FTX later opened an FTX.US exchange for US investors that were subject to US regulations.  FTX was initially funded by, among others, SBF and another crypto-exchange Binance.  SBF’s wealth was created while trading at Alameda, a hedge fund he started in 2017.  As FTX grew and raised additional capital, it attracted institutional investors like Sequoia Capital, Ontario Teachers’ Pension Plan and Temasek Holdings among others.  FTX also pushed the celebrity and sports world, attracting spokespersons Tom Brady, Trevor Lawrence, Steph Curry and Shaq among others.  FTX also bought naming rights to Miami Heat arena and ran a few Super Bowl ads in February 2022.  Apparent success was flying high.  As outside investors came in, Binance sold their stake in return for cash and FTT tokens, a native token to FTX exchange.  It is common for exchanges to have their own token for rewards and ease of transactions when transacting on the platform.  Finally, SBF was an active political donor to the Democratic party in the tens of millions and engaged DC politicians as they considered the regulatory framework for related crypto assets and exchanges.  SBF’s view on regulation is also part of this story.  Now that we’ve identified the key issues and entities in bold, let’s go.

Q2 – Before you go too deep, if I only invest in Bitcoin and Ethereum on different US-based exchanges, am I impacted?

Indirectly yes, but not directly.  Your custodied assets are safe and do not hold the FTX-exchange token FTT.  Nor is there a run on custodians subject to US regulations.  If you did request funds from a regulated entity, client accounts remain segregated and funds are there, though you take price action risk on whatever you own like always.  Others may own crypto assets through a Bitcoin Futures ETF or Trust securities like Bitwise or Grayscale products.  These are securities regulated by the SEC and are safe (though falling in price).  The indirect impact will be felt as investors and FTX sells crypto assets to generate cash for covering the losses related to FTX.  Overall demand for crypto will likely also slow as the industry digests the news and waits for more shoes to drop from other funds who held assets at FTX.  While the price of FTX-linked FTT tokens went from $22 down to under $2 in less than a week, the foundational crypto assets like Bitcoin and Ethereum saw a pullback in price but not as much as when Luna stablecoin and 3 Arrows Capital hedge fund went down this spring.  Of the major secondary coins beyond Bitcoin and Ethereum, Solana is seeing more price pressure as that blockchain played a major role in the FTX platform. 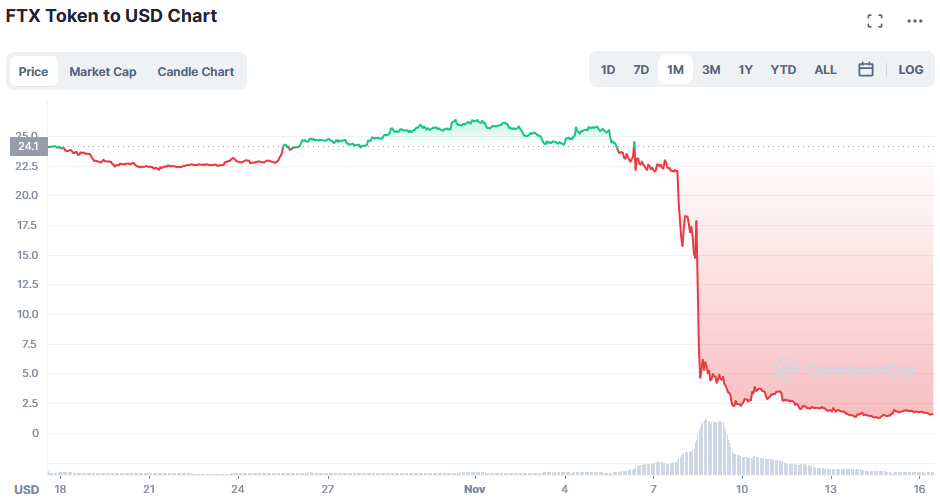 Q3 – Who is Alameda and why are the involved?

Alameda was the crypto hedge fund SBF started and ran in 2017.  One of his successful trading strategies involved exploiting the price differences of bitcoin on different exchanges.  When FTX was created in 2019, SBF stepped away from Alameda, at least on paper.  Alameda did their trading on the FTX platform and helped provide liquidity early on, but in theory were two independent firms.  In reality, the connection between FTX and Alameda was very close.  During times of stress, FTX would lend Alameda funds via the FTT tokens that could be used as collateral for loans Alameda was using to cover trading losses and to give appearance of larger asset balances.  Two of many problems with this was a large portion of Alameda’s assets were from this illiquid security and FTX should not have been providing financial support backed by FTX customers’ assets to a hedge fund.  Also recall FTX and Alameda showed strength and FTX/SBF was very active acquiring different exchanges and hedge funds earlier this year after the LUNA and 3 Arrows Capital blow-ups.  In reality, Alameda likely was facing similar strains but was being propped up by FTX support through FTT coins and loans.

Q4 – How is SBF’s involvement with DC regulation part of this story?

SBF has been very active since the founding of FTX.US in 2020 in engaging politicians and potential regulators of the crypto industry as well as contributing tens of millions on political contributions.  The Securities and Exchange Commission (SEC) regulates securities and Commodity Futures Trading Commission (CFTC) regulates derivatives markets.  There is not clarity from regulators on whether crypto assets are a security and where crypto, stablecoins, crypto exchanges also known as centralized finance (CeFi) and decentralized finance (DeFi) innovation falls in the regulatory framework.  Some pure crypto activities that remain off exchanges and holders keep their own keys may not require regulation.  What is clear is SBF felt the correct regulation would come from CFTC and was very engaged with them.  On August 3, 2022 the Digital Commodities Consumer Protection Act 2022 (DCCPA) bill was introduced into U.S. Congress.  In mid-October a draft version of the bill was leaked and SBF made his views known on what regulations he supported and where he was willing to compromise.  Not surprising given his involvement, regulations were favorable to the FTX centralized exchange business model but many in the industry were worried about the impact on decentralized finance as well as increased scrutiny on a major FTX competitor - Binance.  The founder and CEO of Binance is Changpeng Zhao (CZ).  There were exchanges on Twitter between SBF and other crypto industry leaders about the proposed regulation, including Eric Voorhoos.  On October 29, there was a BANKLESS podcast episode with SBF and Eric Voorhees debating the topic which was enlightening if you want a deeper dive.

Q5 – You just mentioned Binance again.  Is this where they come into the story?

After I listened to the BANKLESS podcast, it was clear to me that many in the crypto industry disagreed with SBF’s regulatory path at the expense of others in the industry.  On November 2, Coindesk – a crypto focused website – released a report detailing the balance sheet of Alameda.  Of the $14.6 billion total company assets, $3.6 billion was “unlocked FTT” and another $2.2 billion of “FTT collateral”.  That is about 40% of Alameda’s balance sheet tied to FTX.  So much for independence.  Also recall I mentioned Binance received FTT tokens as part of their equity stake when they exited FTX last year.  They still held about $520 million worth in late October.  After seeing the Coindesk report, Binance’s CZ put out a tweet on Sunday, November 6 saying they would liquidate any remaining FTT on their books.  A follow-up email from CZ later that day stated “Liquidating our FTT is just post-exit risk management, learning from LUNA. We gave support before, but we won't pretend to make love after divorce. We are not against anyone. But we won't support people who lobby against other industry players behind their backs. Onwards.”  Recall LUNA was the stablecoin that imploded this spring.  The run on FTT tokens and FTX was on.  Alameda stated they were solvent and would be a buyer of FTT at $22.  That didn’t last long and once FTT broke through $22 on November 7, it was clear Alameda was done.  There was also over $5 billion withdrawal requests for FTX International after the Binance tweet.  At this point, it wasn’t known how big of a hole this left on FTX, but it was big.  After FTT broke through $22, FTX stopped withdrawals on November 8 but claimed the customers’ deposits were there.  If that was true, withdrawals should have been met over time.  It is true the Binance move triggered the run, but it only exposed the fraud and leverage going on at FTX, it didn’t cause it.

They did – in a non-binding letter of intent on November 8.  However, it was subject to due diligence.  This Binance offer stabilized FTT token temporarily.  However, it took less than a day before Binance backed out of the FTX deal citing their due diligence and news reports of FTX mishandling customer funds.  The price of FTT quickly went from about $17.50 to below $5 within hours.  CZ also offered two big lessons in a tweet that day.

Q7 – What were FTX options at this point and did we hear from SBF?

On November 10 SBF tweeted a long apology and brief explanation.  He indicated in search of capital to help fill the hole, which was rumored to be over $10 billion.  He also clarified FTX US was separate from FTX International and not impacted by these events, Alameda would shut down and gave rough insights on the amount of leverage and lack of liquidity FTX had.  He admitted to poor judgment on use of customer funds.  On Friday November 11, SBF filed FTX, FTX US, Alameda and other entities for voluntary Chapter 11 bankruptcy proceedings.  The attorney involved in the Enron bankruptcy proceedings was named head of FTX entities during bankruptcy.  The recovery of customer funds will be very slow in coming, if at all.

The bankruptcy proceedings will take time.  The demand for crypto assets and trust by potential new and some existing participants will be delayed but I don’t believe will be stopped.  More attention will be paid to the type of custodian used if owning crypto assets directly.  The attraction of Trust securities from Bitwise and Grayscale may also increase since those institutions deal with custody due diligence.  I doubt the version of DCCPA regulation that SBF was pushing will pass but I do expect other regulations to occur relatively quickly.  One place to start may be the simple step of not allowing a custodian to also be an exchange, and of course enforce no commingling of customer assets.  One industry player commented that ironically the collapse of FTX may push the regulatory clarity of crypto assets faster, perhaps resulting in a faster approval of a spot Bitcoin ETF than before.  There will always be the push for crypto purists to push against any regulation since the blockchain itself clarifies ownership and you possess the key.  The expression “not your keys, not your crypto” captures this sentiment and those group of participants will always remain.  But I also like to say “lose your keys, lose your crypto” and believe there will always be a need for a regulated custodian for those who don’t want to take that risk, among both retail as well as institutions.

I remain long-term bullish on crypto assets though there will be near-term headwinds and loss of trust and confidence from investors.  Fraud and excess leverage occurred and took down FTX but that is also true for other assets classes over time.  The powerful underlying technology still remains with its unique qualities of blockchains, smart contracts, digital property rights of non-fungible tokens (NFTs) and other characteristics that will apply to existing things done today and new applications of tomorrow.