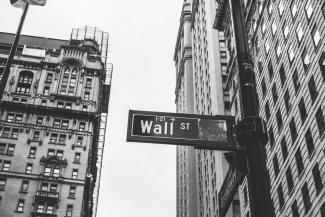 Brief FOMC Overview and May vs. March Statement

You likely have seen similar headlines - and at times the rates may be raised or lowered - and maybe the headline used FOMC instead of Fed.  This post gives a very brief description of the Federal Open Market Committee (FOMC) and the statement issued after the latest meeting on May 2, 2018.  Here are a few key excerpts explaining the FOMC from the Federal Reserve website.  For those interested in further details, follow the link.

"The term "monetary policy" refers to the actions undertaken by a central bank, such as the Federal Reserve, to influence the availability and cost of money and credit to help promote national economic goals.  ..."

"Changes in the federal funds rate trigger a chain of events that affect other short-term interest rates, foreign exchange rates, long-term interest rates, the amount of money and credit, and, ultimately, a range of economic variables, including employment, output, and prices of goods and services."

"The FOMC holds eight regularly scheduled meetings per year. At these meetings, the Committee reviews economic and financial conditions, determines the appropriate stance of monetary policy, and assesses the risks to its long-run goals of price stability and sustainable economic growth."

"Economic projections are collected from each member of the Board of Governors and each Federal Reserve Bank president four times a year, in connection with the Federal Open Market Committee's (FOMC’s) meetings in March, June, September, and December. Several charts and a table that summarize those projections are released at the Chairman's press conference within hours of the meeting. ... "

The FOMC specifies what federal funds rate they are targeting at each meeting and achieve that objective using the tools mentioned.  It is important to note this rate is an overnight rate so it directly controls short-term rates.  As stated, this rate affects long-term interest rates but not directly.  That is why the FOMC can raise overnight rates by 25 basis points (0.25%) and have a noticeable impact on 2-year rates but not necessarily the 10-year rates.  The other thing to note is the difference between 10-year and 2-year rates is one common measure of 'yield curve shape'.  When the two rates are getting closer together, it is called a 'flattening yield curve'; when getting wider, it is called a 'steepening yield curve'.  It is common for the yield curve to be flat before a recession, but a flattening yield curve does not necessary imply a recession - especially when short-term rates are so low and longer-term rates may be held down by global demand relative to global rates.

n addition to the quarterly economic projections and press conference (click here for latest), the Fed also publishes a statement after each meeting.  The format is fairly standard but changes are made to indicate how the economy is performing and to capture the FOMC's view on its two primary objectives - price stability (i.e. inflation) and sustainable economic growth (i.e. maximum employment).  It also communicates if the FOMC is changing the fed funds rate and any balance sheet changes which also impact interest rates.  These changes are scrutinized closely by market participants to gauge how the economy is doing and likely future rate changes.

Below is the most recent statement compared to the last meeting released March 21.  This statement was being watched closely since the Fed's preferred inflation measure - PCE - hit the 2% target based on the last data release.  The Fed addressed this by adding another "symmetric" to the statement (already had one in last paragraph) to imply the Fed will let inflation run a bit above the 2% target just as it had run below that level for awhile.  It also gave a shout-out to strong business investment. 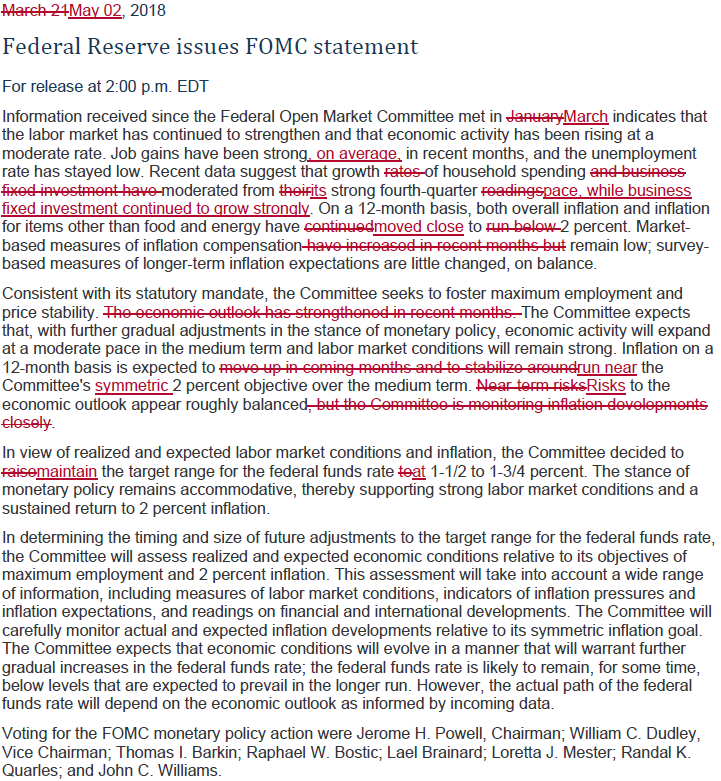 The next FOMC meeting concludes June 13th.  This includes an update to the economic projections and a press conference.  According to the CME FedWatch Tool, the fed funds futures are pricing in a 100% chance of another 25 basis point rate hike in June and about a 45% chance of two additional hikes by the conclusion of the December 19th meeting (probabilities as of May 4, 2018).