This has been quite the start for 2019 across many asset classes.  Over a short four months we have some asset classes up +3.54%, +5.71% and +8.78%.  Pretty good you think for equity markets over a 4-month period, right?  But these are actually the returns for three bond asset classes - TIPS, investment grade credit and high yield respectively.  YTD US equity markets are approaching +20%, Int’l equity around +13% and even commodities are up close to 6% despite “no inflation and a slowing global economy.”  Smokin’!

This is probably a good time to remind readers “Past performance is no guarantee for future results.”

Admittedly the starting point for this performance was after a fairly steep decline that hit a relative bottom on Christmas Eve.  But the key fundamental drivers in place for this massive rally were a Federal Reserve that hit the pause (but not cut) button and a US and even global economy that isn’t spinning into a recession near-term.  The Federal Reserve meeting today reinforced the relatively stable economic backdrop but low inflation described as “transitory” reinforced my view that the next Fed move is a rate rise.  The market was pricing in a rate cut which gave strong support for risk assets.

The graph below shows the growth of select major asset classes over the past year (as captured by ETF/Ns).  Relative to the end of last September before the late year sell-off, US large caps, emerging markets and high yield have exceeded those previous levels.

Using the same time period and growth chart, here are a few of the major sectors relative to the S&P 500 (orange line).  The financials had been lagging but had a very strong month after strong earnings and slightly higher interest rates.  On the other end, energy was flat on the month and continues to lag over the past year.  Health care also had a rough month as political talk of “Medicare for All” hit the sector.  Staples remain steady and stable.

Given the significance of the Fed on recent market moves, this next graphic shows the change in Fed statement for today’s meeting (May 1) relative to March.  As mentioned earlier, the market is pricing in the next move to be a rate cut.  During the press conference, a few comments from Chair Powell will likely remove some of this expectation.  Some quotes from the WSJ:

“Overall the economy continues on a healthy path, and the committee believes that the current stance of policy is appropriate,” Mr. Powell said … .  For now, “we don’t see a strong case for moving [rates] in either direction,” he said.  … despite evidence that core inflation had slipped even lower, he kept a calm bearing and pointed to idiosyncratic price declines in clothing, due to methodological changes, as well as in investment-management services.  “There’s reason to think that these will be transient,”… . 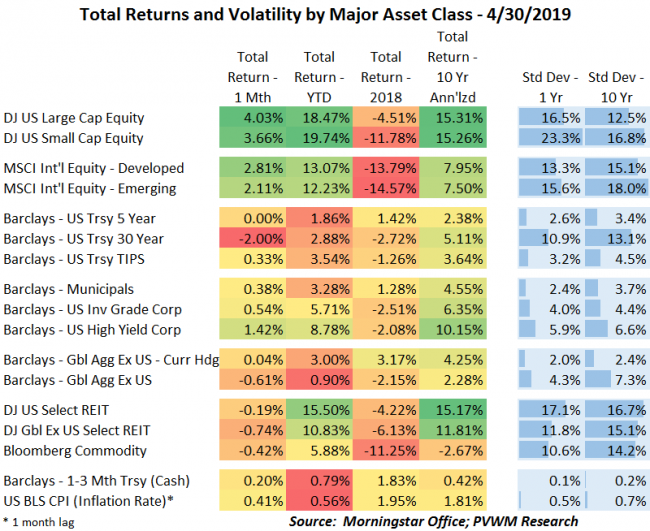