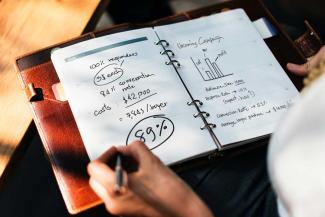 US equity markets recovered a bit after the rough October returns, though still down over the past two months.  For the year, US large caps are holding a solid gain but small caps are roughly flat.  At the sector level, the monthly return range was about 9%, with Health Care having a positive 7% and Technology down almost 2%.  The REIT sector was strong on the back of lower interest rates, along with Utilities.

International equity markets were mixed.  Developed countries were relatively flat for the month while emerging markets had a solid gain.  Unlike the US equity markets, however, the YTD returns remain down close to 10%.  The US dollar remains strong which adds to the negative returns, despite some market participants thinking the Fed is getting less hawkish (won’t raise rates as much).  Valuations remain attractive.

Two asset classes most notable to me were high yield and commodities.  All year the investment grade bond index was drifting down on the back of rising rates and not enough credit spread to offset this market loss.  High yield had enough extra spread to show positive gains.  That changed this past month as credit spreads rose noticeably, hitting high yield returns.  In the commodity space, energy was down significantly, holding down overall returns.  Those who invest in the energy-heavy GSCI index felt this especially hard.  I prefer the more diversified Bloomberg Commodity index for this reason.

Interest rates started the month on a continued climb higher.  The 10-year treasury approached 3.25% before reversing course on the back of nervous equity markets and various Fed speakers discussing current target rate vs. the neutral rate (in economic-speak).  Fed Chair Powell also mentioned the neutral rate but included the word ‘range’.  The neutral rate range is about 2.5% - 3.5% based on economists.  There is a difference of four Fed hikes in that range.  Finally, based on FRED, the 2s/10s curve went from 30 bps at the beginning of the month down to 21 bps at the end.  The first few days of December saw an even further flattening and bears watching.  As a reminder, check out the graphs on my website if you want to see a picture for historical context. 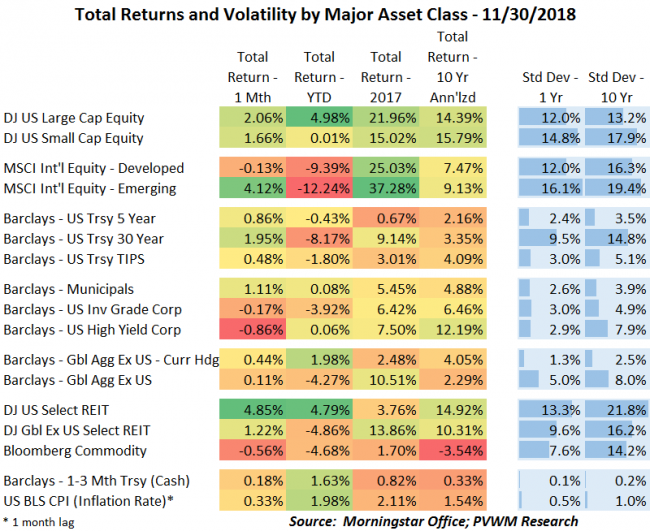