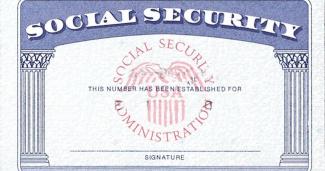 The 2018 Social Security inflation adjustments are finalized.  For those receiving benefits, there will be a 2.0% increase for 2018 GROSS benefits (before Medicare premium deduction).  For those earning wages and paying into Social Security, the maximum wage amount subject to 6.2% SS payroll tax increased 1.2% to $128,700.  Recall your 1.45% Medicare rate is not subject to a wage cap.  I say 'your' since the employer also pays the same %'s for a total of 15.3% of gross wages paid into the Social Security / Medicare program.

The graph below shows how this 2.0% benefit increase compares to recent years along with how the increase is calculated.  There was a relative large monthly inflation reading again for September (partially due to hurricane impact on gas prices) which pushed the final increase higher from last month's estimate of 1.8%. 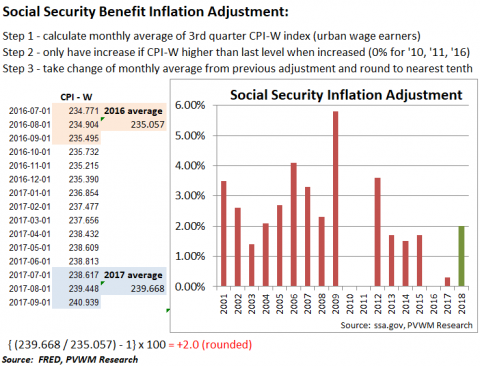 Note the inflation index used for Social Security is the non-seasonally adjusted index for wage earners (CPI-W), not the more common seasonally adjusted index for all urban consumers (CPI-U) used in regular inflation reports reported in the media.  There is also an experimental inflation index called CPI-E which captures the common basket of goods and services for those age 62+.  There are years when these different indices can diverge significantly, but this year isn’t one of them.  The graph below shows these indices over the past ten years.

Don't forget the 2.0% increase applies to gross SS benefits.  The monthly Medicare premium is deducted before the net amount is deposited into bank accounts.  The 2018 Medicare premium has not been announced yet (expected in November) but an earlier estimate was an increase of $25/month.  That means most of the increase in SS gross benefit may be consumed by the higher Medicare premium.  This would be a very large % increase from the average $109/month Medicare premiums most are paying now.  The reason is because of the last two years' low to no increase in benefits caused the "hold harmless" clause to kick in which prevents net benefits from decreasing.  Medicare premium increases were held very low and the extra cost spread to high income recipients and new enrollees.  That is now gone.  So be thankful you didn't have the higher premiums the past two years (and thank the higher income recipients for carrying the load!).  Did you also know the Medicare premium paid only covers 25% of the true cost of Medicare Part B (doctor visits)?  The other 75% comes from general tax revenues.  What about the 1.45% payroll tax?  That goes to cover Part A (hospitals).  See my previous blog post that describes Social Security / Medicare funding in detail.

The wage cap increase of 1.2% is based on a different index - the national average wage index - with a two year lag.  This is the same wage index and two-year lag methodology used to inflation adjust past earnings into today's dollars to arrive at the Social Security benefit.  For those interested in seeing the details of how the monthly benefit is calculated, here is a 2-page summary document from ssa.gov.

So enjoy the 2.0% benefit increase and relatively muted wage cap increases.  But before retirees increase the income budget for 2018, wait for the Medicare premiums to be announced next month.