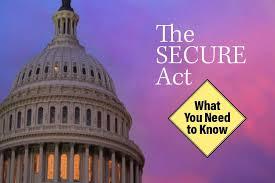 10 Ways the SECURE Act Impacts You and Your Loved Ones

Various rules dictate how much people can save in various retirement plans like IRAs and 401k/3b’s.  Additional rules govern how funds are taken out.  Late last year Congress passed the SECURE Act which made some significant changes starting this year.  The full name is Setting Every Community Up for Retirement Enhancement, but not every community was enhanced.  In general, those saving into plans and the owners and spouses taking distributions saw improvements; non-spouse beneficiaries taking distributions did not.  These beneficiaries (few exceptions) must do so over 10 years, resulting in higher taxable income and potentially higher tax brackets.  Roth conversions and a trust as beneficiary are two areas that need to be revisited.

It is important to note that if on 12/31/2019 the event occurred that required distributions to start on the old rules (age 70.5 or older, someone passed and you are beneficiary) then the old rules still apply.

This blog post will identify 10 major changes that will impact many, including a change coming in 2021 to required minimum distribution tables that is related to but not part of the SECURE Act.

#1 – Required minimum distributions (RMDs) still apply but the starting age is now 72, not 70.5.  If you were already 70.5 on 12/31/2019 then continue with the old rules.  The same rules apply when you must start the distribution – first year can be delayed until the following April; subsequent years required by 12/31 of each year (if you delay the first RMD, be aware of income tax hit in second year).  The minimum distribution amount required equals the previous year-end balance divided by an IRS factor based on age that distribution year.  For a 72-year the factor is 25.6.  A total IRA balance of $500,000 on 12/31/19 and turning 72 in 2020 would require at least $19,531.25 distribution.

#3 – The age when qualified charitable donations (QCDs) directly from IRA can begin remains at 70.5.  The main tax benefit of a QCD is it counts toward RMDs but not included in adjusted gross income (above the deduction line).  This strategy has become more valuable as more people are using the higher standard deduction and not itemizing, where charitable donations are picked up.  The SECURE Act allows the 71-year-olds who made QCD’s in 2019 to continue this year if they wish.  It likely won’t motivate new 70.5-year-olds to start but it may.

#4 – Those with eligible compensation can now make contributions to a Traditional IRA beyond age 70.5; this does not stop at 72.  In the past one was only allowed to make Roth IRA contributions over age 70.5 if all the other Roth rules applied.  Yes, it will be possible to contribute a deductible amount and be forced to make a distribution in the same year if wish.  One scenario that would make sense is if the deductible contribution brought you down to a lower tax bracket, especially the 12% income bracket where capital gains tax is 0%.

#5 – *  MAJOR CHANGE *  For non-spouse beneficiaries of those who pass after 12/31/2019, inherited IRAs and 401k/3bs must be distributed over 10 years, not the age-based RMD factors.  This does NOT apply to “eligible designated beneficiaries” - spouses, disabled, chronically ill and beneficiaries within 10 years of IRA owner.  Minor children are also “eligible” but once they reach majority, the 10-year applies.  And again, for beneficiary IRAs from those who passed in 2019 or earlier, there is NO CHANGE.

For those impacted, this has the potential of a higher tax bills, not only from higher taxable income with the larger distribution but they may get pushed into higher tax brackets.  Using the $500,000 IRA again, if that owner passed in 2019 or earlier, the beneficiary who turned 50 by 12/31 of the year following death would use the RMD factor of 34.2 resulting in a $14,619.88 first year distribution.  The factor reduces by 1 each year (different approach for owners).  If the owner passes after 12/31/2019 that $500,000 must be taken by the end of 10 years.  While not required, if the amount is taken evenly and assume 0% gain, that is $50,000 each year, over a $35,000 increase.  This could also impact other taxes (like extra 3.8% Medicare tax), limit IRA deductions or contributions and credits based of adjusted gross income.  When considering Roth conversions for the owner, one should now consider the tax impact on next-generation due to this shorter distribution period.

Also note that inherited Roth IRAs also have required distributions.  It is true they are not taxable but you still must distribute them.  The SECURE Act will reduce the amount of time funds can grow tax-free.  If funds aren’t needed by the beneficiary, the likely approach will be to take the entire distribution in the 10th year to maximize the time allowed for tax-free growth.

#6 – If you named a Trust as beneficiary for IRA and 401k/3b for estate planning, you should revisit the intent.  The common see-through trust allowed the age of the oldest underlying beneficiary to be used for the stretch IRA in the past.  If young beneficiaries were named, the trust could control access to the funds over a long time while the annual RMDs were deposited.  Now for a discretionary (accumulation) trust which may keep funds in the trust, there may be much larger balances building up faster due to higher IRA distribution subjecting more funds to the higher trust tax rates sooner (due to lower bracket thresholds for trusts).  Conduit trusts, which pays out to the beneficiary whatever comes in as the RMD, will now distribute the total IRA balances out of the trust over 10 years.  This is perhaps a much shorter time period than initially intended of having the trust protections in place.

#7 – More 401k and 403b plans may begin offering an annuity choice as an investment option due to an objective safe-harbor for the plan sponsor to select an annuity provider.  Plans were allowed to offer annuities in the past but sponsors were hesitant to select a lifetime income provider out of concerns for potential bankruptcy of the provider and resulting liability from participants.  Potential bankruptcy remains the same but the liability is greatly diminished.  Portability of these annuities between plans is also allowed.  It is still very important to focus on the core annuity feature – paying a monthly benefit regardless of how long one lives – and avoid or be very aware of the costs of the bells and whistles attached to annuities.  Also note the tax-deferral feature of an annuity should carry no value in a tax-deferred account.

#8 – 401k and 403b plans will begin showing the monthly lifetime income the current balance will provide if annuitized (delayed implementation for logistics).  While I applaud this effort, it will be important to see the assumption and disclosure requirements by the Department of Labor to derive this monthly amount.  A few key drivers not always understood include:  a) assumed interest rate (the benefit is much smaller in low rate environment); b) clarity on age benefits begin (I assume now and not age 62, 65, 67); c) are monthly benefits inflation adjusted? (probably not); d) is there a survivor benefit (does my lovely bride get 50% or 75% of benefit after I pass or 0%)?

#9 – Small employers have additional rules to make setting up or maintaining a plan easier to help encourage more plans for employees, along with a few more requirements.  Briefly this includes being able to set up plan by tax filing date rather than 12/31, increasing the tax credit for start-up costs, incentives for automatic enrollment, potential to join a pooled employer plan and requirement to include longer-term part-time workers with at least 500 hours of service each year, down from 1,000.

#10 – 529 Plans were expanded to include up to $10,000 (total per beneficiary, not annually) for student loan repayments and use for apprenticeship programs.  Recall changes were made in 2017 that allowed up to $10,000 of 529s to be used for K-12 tuition only.  However, individual states may need to explicitly approve changes to their state plans before using.  The student loan feature could also be another way to utilize funds from grandparents without potentially impacting financial aid.  In addition to delaying their funds (if exist and can) for the last 3 semesters of school, an extra $10,000 could be shifted to after school for loans.